What Are The Blue Doors?

Aerial shots with numbered lots and boundaries drawn in. Several photos of cleared land with some patchy grass. Nothing much else to see.

So how do you effectively cut through and advertise vacant land?

Earlier this year one of our agents set out to create some buzz, with a new marketing strategy called The Blue Doors.

Brad has worked in real estate since 2013 and has been selling property in Newcastle and Lake Macquarie with the Altitude team for the last four years. With a background working in senior management in registered clubs for almost a decade, Brad is interested in raising the benchmark when it comes to service and professionalism in real estate sales. The Blue Doors is just one of his many innovative ideas. 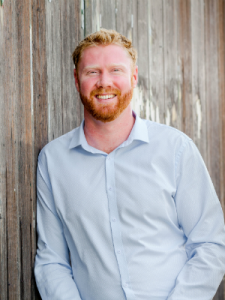 Brad, tell us a bit about The Blue Doors idea?

Basically, we pop a shiny bright blue wooden door in a white door frame at the front of a block of land we have for sale. It’s a real door, and you can open it and walk through it.

The blue door is a way to get a bit of buzz, to make the vacant land stand out when you drive past or see it online. It not only makes for a great photo opportunity, the door naturally invites you to walk in and see what’s on the other side.

But there’s more to your campaign than the actual door, isn’t there? The mystery of The Blue Doors had the locals guessing hard earlier this year, didn’t it?

Yes, before the blue doors went up we ran a teaser campaign in Lakelands, where we had several blocks of vacant land up for sale.

We started with a letterbox drop that simply said: “The blue doors are coming”. It had no branding or other information so it created a little bit of mystery.

The following week we put up the blue doors on the land and did another letterbox drop with a website link saying “visit thebluedoors.com.au”.

We also ran a social media campaign to get a bit more buzz, linking through to the website plus realestate.com.au and domain.com.au where the land was advertised.

Lakelands is a very tight-knit community. After the letterbox drop, the locals were all talking about it in an online forum, asking “what’s this blue door stuff all about?” One person commented that since everyone in Lakelands was talking about it, it was clearly doing its job.

I saw someone else joke, “I knocked, but no one was there!”.

So the organic reach was fantastic. It really did create a lot of local interest, and a marketing buzz. It got the land into the public eye.

So Brad did it work – did the land sell?

In the end, we found our buyers through Facebook and the land sold above expectations. So social media played a big role.

The Blue Doors are about making the blocks of land unique. They are a differentiation tool. It’s more eye-catching than your average For Sale sign. The idea is to get people talking.

Have you used the concept elsewhere?

Yes, we have used it on a few other blocks. I currently have a 19 block subdivision in Cameron Park for sale. I put up six doors, so every third block has a door. When you go down Portland Drive you can see the doors and they do attract attention.

The blocks in Cameron Park are affordable and they’re selling for around $299,000. They’re also fairly flat and are a good size and shape, ranging from 456sqm to 575sqm.

Areas like Cameron Park have huge growth potential. Because of this, there has been quite a high level of interest and we’re receiving multiple enquiries per day. Locals and people from Sydney and other locations have been enquiring. We’ve also had strong interest from first home buyers as well as investors.

The new Commonwealth Government HomeBuilder scheme offers people $25,000 towards building a new home, and you have to sign a contract before the end of 2020 to use it. This is just one thing that’s encouraging people to really think about buying land to build their dream home right now.

Does the Blue Door come with the block of land?

If you buy a block of land I’d be happy to leave it there for you.

The Blue Doors have become a bit of a landmark. Buyers know they’re at the right place when the blue door is there. It defines the land. It looks great on Instagram too.

If you’re interested in making Lake Macquarie or Newcastle the location of your new home, contact our team today.